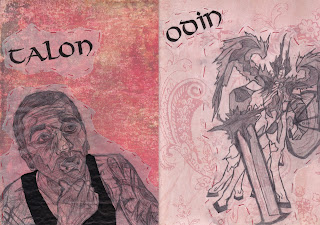 Talon is wonderful I can blab about him forever and all the sickenly sweet things I would say would make you want to vomit, but he is very honest, trustworthy, and I have lots of faith in him. I chose his mythological alter ego to be Odin, because he loves Norse mythology and because I thought it fit pretty well. Odin has two ravens Thought and Memory, a sweet sword, usually is brandishing a helm and shield, and has an eight legged horse. Along with a pack of two wolves that he commands and a magic spear that never misses its target and a magic ring, which are not featured in my illustration. And on top of it he only consumes wine or mead. Party on Odin, party on. And Valkyries are his bitches. That's right. Talon is wise beyond his years and bad ass. So that's where I drew the comparison. My Odin is kind of like a monstrous combination that's more of an eight legged centaur. For Talon I chose red for the vibrant energy. 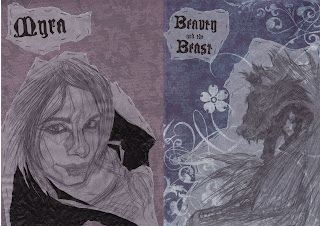 Myra is my best friend, room mate, and one of my favorite people ever. She is kind, considerate, caring, loyal, and everything you could want in a best friend. Along with being compassionate, she always sees the good in people and is very intelligent. Her fairy tale alter ego is Beauty from Beauty and the Beast. In my modern rendition she is a punk-ish looking girl with a torn dress, converse high tops, and the Beast is protecting her, because she herself is fragile and sensitive to the real world around her. Beauty was selfless and took the place of her father at Beast's castle. And able to see the goodness inside the Beast despite his appearance. I always think of purple for tranquility/calm when I think of Myra, so I went with purple and indigo.

p.s. to everyone, I, for some reason am much better at drawing women than I am at drawing men. That is all. 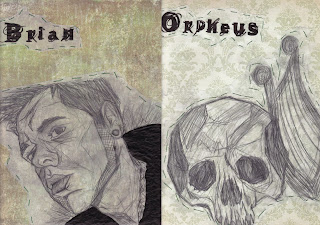 Brian has been a close friend since the beginning of high school. I chose Orpheus, because he was essentially a sweet bard. Brian is really good at telling stories, and entertaining people in general he's very funny and sociable. However, like Orpheus, Brian doesn't have very good luck with the ladies. The death of Orpheus is what is most concerning Orpheus decided one day to stop believing in Dionysus his patron god and instead chose to follow Apollo the sun god and renounced all the other gods, so a mob of Dionysus' followers came to him at sun rise while he waited for Apollo and cut off his head. I find it almost too coincidental with the timing of this project that our friendship of many years is becoming precarious, and follows the storyline a little too well. Minus the beheading part. Brian wears lots of lime green and whenever I see green it reminds me of him.

Overall for these entries I focused on the techniques of:

Random Stimulation: While I was sketching the portraits and characters I had it in my mind that they would be completely finished drawings mixed with acrylic or tempera, but as I was sketching rather aggressively I stopped paying attention to what I was doing and really focused on the sketches themselves, and didn't even think. It became a kinetic exercise and like Jackson Pollock always ranted on about it was "an act of the collective subconscious" "almost like a trance." I liked them so much I decided to leave them and top them with india ink and workable fixative in case I wanted to re-approach it later, but I love the sketches themselves being raw and energetic.

Color Selection: Rather than choosing multiple colors I decided to pick one color per person and character that I felt most strongly associated with that person. Subjectively assigning color, if you will. Then focused on hues and textures to make my entries more tangible.

Visual Voice: I had been thinking about how I would want my journal to look and I wanted it crazy and expressive, but polished and presentable at the same time. I think by using the sketches with the textured paper, and hand stitching it created a mood for the rest of my journal, that I am glad to carry out. The only thing I wanted to do and didn't yet was add copy of descriptions like what I typed next to the spreads above. I ran out of time to write and stitch those, but if I have more free time this week I will revisit that idea, because I really like the idea of my visual journal being a complete piece based off of process and exploration.

Embedded Images: I found that using the transparent drawing paper would allow to see the beautiful textures underneath the line work of my sketches. And then hand stitched the images onto the paper giving it an even more tangible feeling and the action itself was very personal.
Posted by brit at 9:56 PM