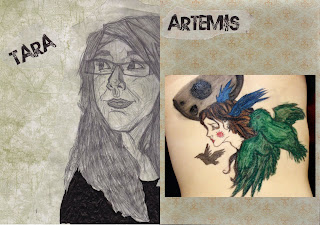 Tara is another one of my best friends. She is very book smart, loves her dog, and acts like shes my mom a lot (i.e. cooks for me, asks about my health/sleep, and like to "take care" of me), and has a sparrow tattoo on her foot. I chose Artemis the Greek goddess of nature/wilderness and childbirth as Tara's alter ego. Artemis is usually depicted with either a stag, wolf, or bird and because of Tara's tattoo I chose to stick mostly with birds. The moon is also associated with Artemis. Tara in general reminds me of being very earthy, so I chose an earth tone palette for her. 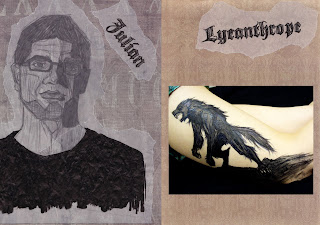 Julian goes to MCAD and is one of my friends from school. He is pretty much made for medieval times. If this were like an era of Vikings and stuff he would fit right in, but its not, so he's just overly muscular and tall with a deep voice. Julian is very nice to me though and sometimes I feel like he gets sort of a bad rep as being scary, but he's really a big ole softie. Anyways, Julian is quite the party animal and he often times has this coin-like personality sort of like a good side and a bad side well not necessarily bad, but a "darker" side. His alter ego is a lycanthrope or more commonly known "werewolf". The lycanthrope can be traced back to Greek mythology. The most obvious connection being the transformation and struggle between balance of good/evil. If Julian were a color to me, he would me muddy water colored, in a good way that's not an insult and only makes sense to me I'm pretty sure, so I tried to combine a scheme that fit that feeling. 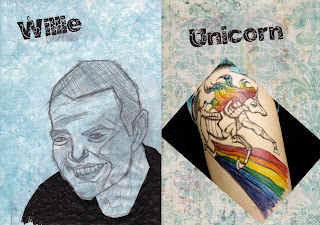 Willie is hands down one of my funniest friends, we worked together at Best Buy for like ever and he is soooo funny. He has this unicorn sweatshirt he wears all the time in public and he really likes this game on Adult Swim called Robot Unicorn Attack so, the obvious love of unicorns originally drew me to choosing a unicorn for his alter ego specifically a badass rainbowy robot one, but the unicorn is also mentioned in Lewis Carroll's Alice Through the Looking Glass and is quite humorous. I chose blue, because we worked at Best Buy and I mostly saw him wearing blue.

I tried a new technique of drawing/painting on a human canvas my roommate volunteered, and I think it turned out pretty cool. It was my first time ever so I tried to use water soluable materials like crayola markers, water color, and brush pen, also, I didn't want her to break out or anything. But I think if I'm pushing this like I intend to do for next week I'm going to need to find better mediums maybe invest in face/body paint or something similar made for skin application. It was surprising how well the pieces fit compositionally to the curves of the body and I'm very happy with placement/composition for the most part. I want to be a tattoo artist eventually so this was kind of fun to just play with using skin as a canvas.

Next week, I'm going to get the people I'm doing for my journal to sit for me so I can draw their portrait and their alter ego on them and then take pictures :)

Things I'm Not Happy About:

1.) Obviously, I didn't allow myself enough time to sew the transparent parts on and I lost my needle on top of it, so I will have to sew them on and re-scan them later this week.

2.) I had intended to print the pictures of the illustrations on vellum and then sew the printed ones on to keep consistency, but when I went to the store to buy vellum for my printer, they were out of the slightly frosted vellum that I normally print on so I bought semi-transluscent drafting paper and tried to print on that instead, but its much more slick than the vellum and the ink smeared right off and made a mess for me and my printer, so I had to improvise and just crappily layer it in Photoshop to be able to post it on here on time.

3.) When moving things around in my studio I accidently ripped off part of Julian's head. Whoops!
Posted by brit at 10:41 PM