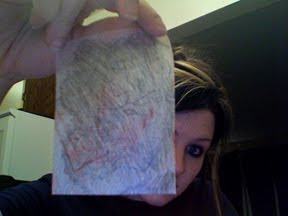 So our Print Paper Book class on the first day jumped right into making a book! How sweet! Jody Williams is a super fun neat teacher too love her quirky self to death so far she's super wise too, she'll be a great teacher. We got the topic of Odyssey and immediately i thought of Scylla one of the two monsters from when they were sailing their boat through that like strait or whatever well here's some history:
In Greek mythology, Scylla (pronounced /ˈsɪlə/; Greek: Σκύλλα, Skylla)[1] was a monster that lived on one side of a narrow channel of water, opposite its counterpart Charybdis. The two sides of the strait were within an arrow's range of each other—-so close that sailors attempting to avoid Charybdis would pass too close to Scylla and vice versa. Scylla was a horrible sea monster, with six long necks equipped with grisly heads, each of which contained three rows of sharp teeth. Her body consisted of twelve tentacle-like legs and a cat's tail and with four to six dog-heads ringing her waist. She was one of the children of Phorcys and either Hecate, Crataeis, Lamia or Ceto (all of whom may be various names for the same goddess). Some sources, including Stesichorus cite her parents as Triton and Lamia. 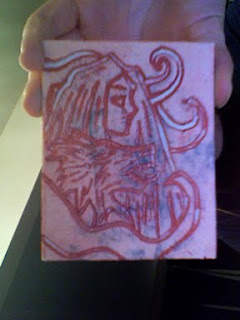 So, yeah I chose to do a chick with frickin dogs heads on her torso and a shit ton of tentacles essentially, done in my own style started with a sketch on some tracing paper transferred to a rubber block then cut away with an incising tool. The stamp was then held on red ink and transferred onto paper that I had repeatedly copied the text:

"...they writhed
gasping as Scylla swung them up her cliff and there
at her cavern's mouth she bolted them down raw—
screaming out, flinging their arms toward me,
lost in that mortal struggle."

Which is an excerpt from the Odyssey by Homer. 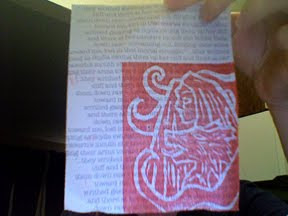 This is a test print I did and then I turned in another one after I made a little wave stamp too. I finished first in class ^___^ because I'm a quick little worker bee. 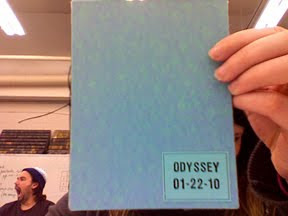 The cover is like a hard card board we wrapped in this soft semi blue semi green paper Jody provided us and put the title on which was a sticker Jody also provided us. 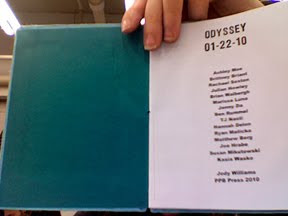 This is the inside we had to saddle stitch the pages and that dark blue-green cardstock together and then procede to glue the dark green cardstock to the hard covers we wrapped, the hard part was getting the cardstock placed evenly because it curled from the glue since it wasn't a strong paper and the PVC glue we were using dries really fast so you had like 3 seconds to move it before it was just stuck in place. 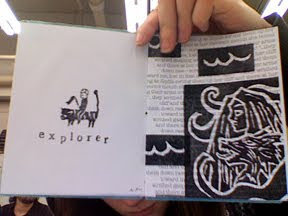 This is the first spread you see when you open the book my print is on page 2 we decided as a group the order of the images we all made and I made page 2 yippe! Thats what the print looks like too with the waves and the text in the background and the prettyness :) I'm very pleased with it as my first real rubber stamp and book making experience. 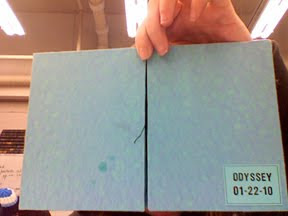 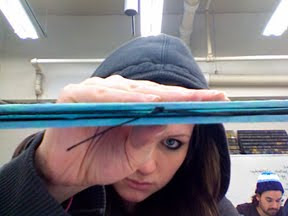 This is a better view of my saddle stitching I was the first to finish it in class and I helped teach some people how to stitch their books too yay class!
^____^

I am so pleased with this assignment how cool to go to class the first day and jump on a project and then have a finished book you hand made yourself to show by the second day of class! <3 this class is gonna rule!